LIONDALER is the chosen name for the improvised duo consisting mainly of Greg Haines and Danny Saul. Started in Manchester at the beginning of 2007, Liondialer quickly became both loved and hated for there entirely improvised performances mainly consisting of Haines on Electric Cello and Laptop and Saul on Guitar and Laptop. Intricate textures and melodies interspersing with waves of fierce noise convinced audiences that Liondialer were no ’Ambient’ act – this was something far more visceral and expressive.
As the band developed over a series of shows in the most unlikely of venues, each concert was being recorded by Gavin Brownrigg (aka Arkhonia), who in the early months of 2008 sculpted these recordings into something that became their debut album, simply and facetiously titled ’Live!’.
While Saul still lives in Manchester, Greg has since moved to Berlin. In terms of Liondialer their influences are diverse, but some names worth mentioning are Talk Talk, Supersilent, Ornette Coleman, Tony Conrad and Loren Connors.


“Inevitably, they don’t do songs – this more of an orchestrated movement of noise – the instruments provide the soundwaves which are then manipulated in real time with live triggers, delays and on the fly sampling. It’s a rumbling cacophony…There’s a girl sat with fingers in both ears for the entire 20 minute performance; two guys are sat inches from the table on which this unfolds, loving every minute and probably weighing up whether they should headbang or transcend to another dimension. You won’t forget this partnership and you certainly haven’t heard the last.“
- Manchester Music, 26.08.07 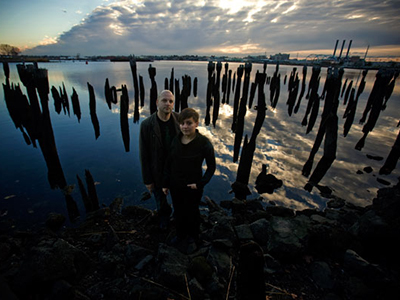 MEM1 (Mark + Laura Cetilia) seamlessly blends the sounds of cello and electronics to create a limitless palette of sonic possibilities. In their improvisation-based performances, all sounds are derived from the cello as the sole source material, which is manipulated in real time. Their music moves beyond melody, lyricism, and traditional structural confines, resulting in organically revealed narrative. Hailing from Los Angeles, CA, Mem1 has traveled extensively, performing at Roulette (NYC), REDCAT / Disney Hall (LA), the Orange County Museum of Art, the San Francisco Electronic Music Festival, and, in Spring 2009, the Borealis Festival (Bergen). In 2007, they were awarded an artist residency at Harvestworks in New York for the creation of a new Surround Sound piece, Sonodendron. Throughout the next year, they will travel throughout Europe, Norway, and Israel to take part in residencies at STEIM (NL), Kunstenaarslogies (NL) and USF Verftet (Norway), and to perform and create a sound installation for the Museums of Bat Yam (Israel). Their third full-length album, +1, consists of collaborations between Mem1 and artists such as Steve Roden, Jan Jelenik, and Frank Bretschneider. It will be released in early 2009 by Interval Recordings.

BOOMKAT REVIEW AV FØRSTE SKIVA Mem1 is a collaboration between laptop sound-designer M. Cera and cellist Laura Thomas-Merino, so as you can imagine the collision of digital manipulation and expertly played cello is incredibly haunting and at times devastatingly beautiful. To my mind the mixture of sounds reminds me almost of Kim Cascone’s shockingly good Bluecube trilogy (if you haven’t heard these records before you should really seek them out by the way!) crossed with Greg Haines’ cello-driven ‘Slumber Tides’ – there is an ear towards minimalism and sound-design at all times, but the cello parts lift it out of the grey academic world into something far more accessible and definitely more enjoyable. In this it feels like the perfect step forward from the minimal sounds we all fell in love with a few years ago (and for the most part lost interest in), like Alva.Noto’s recent ‘Xerrox Vol.1’ ‘Alexipharmaca’ brings in sounds that we can really relate to, really sink in to and sets them against the glitches, scratches and bleeps to create music that really is the sum of it’s parts. This album is a soundtrack to a midnight forest expedition, something scientific yet moonlit and deeply mysterious